Dennis Maulsby is the author of numerous short-story and poetry pieces and books, including many that have won awards. His first book was a poetry collection he published in 2003 that won silver medals from the Military Writers Society of America and the Branson Stars & Stripes organization; his latest is a poetry collection released in 2015 titled Near Death/Near Life. 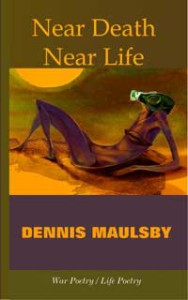 Dennis takes a highly organized approach to his marketing, using what he describes as a graphic approach. He provided instructions, “Draw a long line on a sheet of paper. The left end is the beginning date and the right end, the finish or perhaps infinity. Along this timeline, I mark my progress and goals to be achieved. Example: prior to the finish date for manuscripts, I note marketing things that need to be done in advance of publication, i.e. building up my social platform (Facebook, LinkedIn, Twitter, etc.) so I can generate excitement among contacts/buyers as I reach significant goals and finally offer the book for sale. Other items along the timeline might be writing workshops, authors’ fairs, cultivating contacts (librarians, writers’ groups, news media folks, etc.). I mark when news releases should go out. Items on the timeline form a progression of events in the order they should occur. Items can be added or subtracted or slid forward or back as events change and Murphy’s Law demands.” He also submits to poetry and prose contest to help build his author’s resume to impress potential buyers. 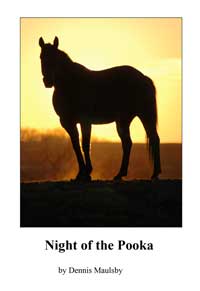 Dennis’ attitude toward marketing hasn’t changed since publishing his first book in 2003; he still finds the most fun in research and writing. He said, “Promotion and marketing is also some fun but not as controllable as the writing, and therefore can be more unsettling.” When asked how he feels about book marketing, Dennis said, “I like to meet and work with people, whether individual buyers at an authors’ fair, performing at a reading, or working with media folks. Some of the personalities I have met have ended up as characters in my books. Everything is grist for the mill.”

The great support he received from his publisher, Prolific Press, has surprised Dennis. “They sent out hundreds of news releases, got the book (print and e-book versions) posted on Amazon and all its international versions and with Barnes & Noble. They offered a drawing for a free book on Goodreads and did other promotional items.” The marketing Dennis found to work the best has been working with news media contacts, appearing at authors’ fairs and readings, using a website, enjoying word-of-mouth, and networking through writers’ groups and social media. He’s had the least luck with convincing libraries to carry his book; he said, “A few bought the poetry book, but not many.”

For those who’ve just completed their first book or have a book about to be published, Dennis advises not waiting for the book’s publication to start marketing. “Don’t wait for the book to be published. Build your media contacts, writers’ groups, social media, reading dates, etc. well in advance of publication.” On being a writer, Dennis said, “Know why you write. What drives you? If you write for friends and relatives or personal therapy, no need to dig deep into marketing. If you have a strong desire to be published, improve your craft, attend writers’ workshops (Iowa Summer Writing Festival is excellent), acquire marketing skills, and prepare a plan/timeline prior to publication.”

Learn more about Dennis at his website here and purchase his latest book on Amazon here.

Free Fire Zone — (Traditionally published fiction) to be released by Prolific Press in the latter half of 2016. A book of linked short stories bound together by the main character, Rod Teigler. Teigler’s Vietnam War experiences, helped along by government experimentation, leave him with a severe personality disorder. Fear or anger turn the hero into something you don’t want to meet up with in broad daylight let alone in a dark alley.

Near Death/Near Life — (Traditionally published poetry released in 2015) The ninety-seven-page book strikes a meaningful and tender balance between the appreciation for life’s poignant moments, and the human experience of war, both as a construct and a memory.

Night of the Pooka — (First place short story award 2015 Montezuma All-Iowa Fiction Contest, also published in Mused Literary Magazine) Father Patrick Donahey has retired to the small town of Winterset, Iowa. He is thrust into a supernatural happening more consistent with the rocky hills of his native Ireland than the cornfields of the Midwest. A Celtic shape-shifter, a wraith has appeared among them. He must decide what action to take to protect his new flock. This is the first story in a book of linked short stories.

Frissons — (self-published poetry released in 2011) A chap-book of award-winning haiku and senryu. Original cover art by the author.

Remembering Willie, and all the others — (self-published poetry released in 2003) Winner of silver medal awards from the Military Writers Society of America (2005) and the Branson Stars & Stripes organization (2009).