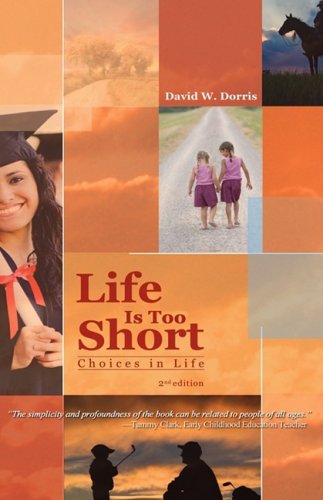 The first Life is Too Short book was written by accident. David said, “I coached softball for thirty years and always liked to teach the kids about life as well as sports. In August of 2001, [during breaks while working at Nestle Purina,] I started to write a paper to give to my team the next year.” Someone asked him if he was writing a book, so he thought “why not give it a try.” In October of 2002, David presented the books to his team and bought them ice cream at Quad Cities’ local shop, Whitey’s. The Quad City Times newspaper came and did a story about it. He kept going from there.

Life many first-time authors, David was surprised by the marketing involved after publishing a book. When asked how he feels about book marketing, David said, “I am learning different strategies. … It’s a lot of fun and I have a great time at book signings. It was difficult at first, but I discovered that after you publish a book, you are not just an author but also a sales person and the more I work at this, the easier it gets.” He said he’s learned what sells his book and who might be interested in events. “I also have events lined up where I can talk about my book to clubs and organizations and then have a book signing.”

David works with a marketing manager at Tate Publishing, including getting help to line up book signings. After an event is scheduled, he answers a questionnaire, which the book marketing manager sends to the local media. David has had better luck holding signing events at organizations other than book stores, including the YMCA, Jaycees, Optimist Clubs, Rotary Clubs, and local college book stores and libraries. He was told after a signing at a college book store reading on December 5, 2014, that he was the only author who’d sold all of the books they’d ordered for an event.

David said, “I believe I am finding the right kind of audience for my book. I am convinced if I can get my books to the right groups, I can sell a ton of them. I am not saying this because I wrote the book. These books won’t sell themselves, so I find when I explain my book to others and show them my book reviews and tell about the success stories that go with it, that sells my book.”

He explains that it also helps to sell the book when he talks about how he wrote and researched it. While watching movies from the thirties, forties, and fifties, he takes notes about comments about making life better. “I may get twenty-five ideas … [then I] pull up my book and insert these ideas,” netting hundreds of ideas in the book.

David credits self-training to his marketing success. “I worked at Nestle Purina for thirty-five years and the one thing a supervisor taught me was to learn to train myself. … He said, ‘Don’t wait to be told to do something, just get it done.’ As a landlord and an author, I do train myself. I was fifty-four years old when I was told to train myself. If I had learned that when I was younger, I might have accomplished more with my life.” This self-training has included some trial-and-error, including a $300 ad in the local newspaper, which wasn’t successful. He has had good luck with sending letters to the newspaper editors, though. “Since the subject of my book is about life, I read the letters from the editor of the QC Times. I then pick a subject, respond, and I use materials from my book to make a point. Some people recognize my name at a book signing and I have been asked if I had my books advertised in the newspaper.”

Recently, David has started a program to partner with local charitable organizations to share his profits with them. The program was recently announced in a feature article the newspaper printed about David. He cautions, though, “Sharing profits with organizations have strict rules about how it is done. You can’t put it in print what you are going to do with your money. When you give, you donate without any publicity.”

He’s also had success by simply talking to people, including with the approximately one hundred places his marketing manager sent to him in a list. He said, “There are always people that are glad to have you do a book signing and then there are some people who are not very nice about it. When people are not nice, I just move on. They may have a change of heart later. I always try to be polite and professional. As published authors, we are also salespeople and we should try to use our time where it will get results.” This is great advice. Don’t be afraid to try different things to market your books; but if it’s not working, move on.

In considering the four Ps of marketing (product, price, place, and promotion), David emphasizes the product: “I wouldn’t be in a hurry to get it published when you get to that point. Take some more time to work on it as if you were going to take the existing materials and start another book. Take this time to make sure that your book is the best it can be and check to see if there is anything of value that you can add or something you should take away from your book that will improve the quality of the product you are going to get published for marketing.” He also advises, “Make sure that you have a publisher that the book stores will accept. Find a publisher that will go out of their way to help both of you make money. … Also find a publisher that will help you with high quality content, grammar, spelling, and punctuation. The better the product, the easier it will be to market.”

David has also done a lot of work finding his target market. He said, “One of your books may have to be marketed different than another. It could take a while, but you have to find your target audience. Try to find groups who will buy your books.” He also advocates taking responsibility for your book marketing. “You and you alone may decide the success of your book. Marketing is a full time job. There are hundreds of ways to market your book. It’s like panning for gold. It takes a lot of looking to find the right place for your book and when you do find it, that is when you will strike it rich.”

Learn more about Life is Too Short: Life is What We Make It and see the awesome book trailer on Tate Publishing’s website. It’s also available on Amazon.